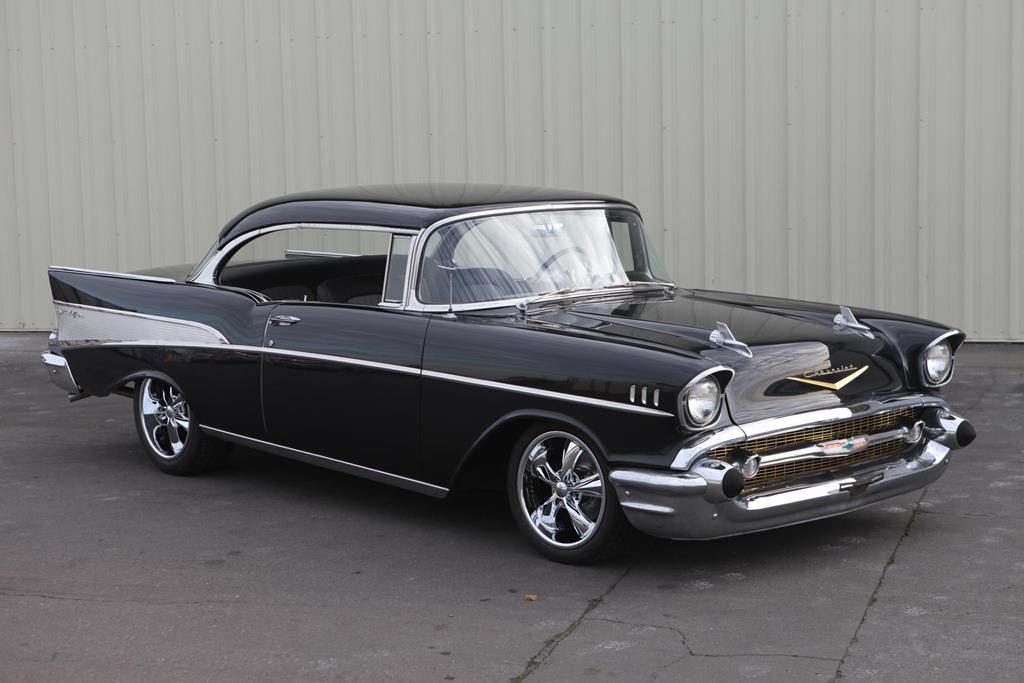 I love telling the story behind classic cars and their owners.  Over the years I’ve spun many a tale, and a reoccurring theme I have found is the tendency for classic car owners to hold onto their cars for years…unlike our current era of disposable cars.  Bob and Barb Mullins have a pair of classics they have held onto for decades…a 1937 Chevy coupe, and the 57 Chevy you see gracing these pages.

Of course classic cars were not always classics, they were simply cars, but the generations that grew up through the now classic car era seem to have a stronger bond with their automobiles.  The bond Bob formed with the 1937 Chevy coupe that he purchased at age 14 for $50 is still going strong today, and in close 2nd is his wife Barb’s 57 Chevy that they have owned for over 40 years.  The 57 was initially purchased as simply a daily driver, but before taking on its driver duties it was torn down and painted in deep black lacquer paint.  As the years passed the 57 developed spider cracks in the paint work and some rust in the drip rails, so it was taken back down and painted again…this time in Emron paint.

As the years passed the 57 was cruised often, and saw some modifications and upgrades, but then rust crept back into the drip rails so it saw less and less drive time until it eventually was parked.  The Mullins continued to enjoy their other cars, but missed cruising the 57 so when the timing was right they turned to MetalWorks Classic Auto Restoration in Eugene, Oregon to breathe new life into their idle classic.

This time around the 57 was to receive more than just paint work, but improved drivability for Barb, primarily in the areas of braking, steering, and overall handling.  After talking with the crew at MetalWorks regarding improving the 57’s performance, the obvious answer was not to upgrade the stock chassis, but instead to order a brand new Art Morrison chassis.  As with many customer’s at MetalWorks who may have never considered a chassis swap, the numbers just make sense after you factor in all the cost involved in improving your stock chassis vs the cost of a brand new chassis which will simply outperform modified stock chassis…it just makes sense.

An order was place with Art Morrison and while the chassis was being built the crew got busy fixing the persistent rust occurring in the 57’s drip rails and a few other details that resulted in the majority of the back half of the body being repainted.  After a thorough buffing to blend the new and old paint work, the Chevy was shinny like a new penny. The TriFive was given the royal treatment in the upholstery department as it received a gorgeous custom interior stitched by Jon Lind who blended classic and modern perfectly.  Lastly the 57 received some new chrome appointments, and a set of gorgeous, fully polished Foose wheels that really pop against the black paint.

The end results of the 57’s transformation are amazing both cosmetically and performance wise.  Barb’s classic retained all of its good looks, but now steers, brakes, and handles like a modern vehicle, making for one sweet cruiser.  The crew at MetalWorks hopes Bob and Barb enjoy every moment spent in their 57 and log a ton more great memories with the car they have lovingly owned for over 40 years.  Bob and Barb state that they have owned many classic cars over the years, but the 37 and 57 will never leave the family.  The pair enjoys the cars with their 2 daughters and 3 grandkids, and they know they will continue to be enjoyed for many more years to come.